Me with an Academy Award

A couple of weeks ago, I told you about my visit to Disneyland. After a couple of days at Disneyland, my husband and I hit the road again. Our next stop was Los Angeles.

Los Angeles was fun. In planning our trip, we scheduled a couple of studio tours. We went to Sony Pictures and Warner Bros. Sony is smaller than Warner Bros., but I would recommend doing both tours if you have the time. If you are fans of Wheel of Fortune and Jeopardy, they are taped at Sony. Wheel of Fortune wasn’t filming at the time, so they took us onto the set. Jeopardy was filming and my husband and I were lucky enough to get into the audience at the last minute.

At Warner Bros., we were able to walk on the set of The Goldbergs and sit on the couch used in the scenes filmed at the Central Perk on Friends. Those were the highlights for me at Warner Bros. I love both of those shows. We had lots of fans of Pretty Little Liars on our tour and, after seeing where it’s filmed and hearing the rave reviews, I’ve decided I’m going to have to watch it.

Of course, we saw the Hollywood sign, walked the Hollywood Walk of Fame, and TCL Chinese Theatre (formerly Grauman’s Chinese Theater). I had fun comparing my hands and feet to those of some of my favorite actresses. We also went to the La Brea Tar Pits where many fossils from the Ice Age have been excavated. 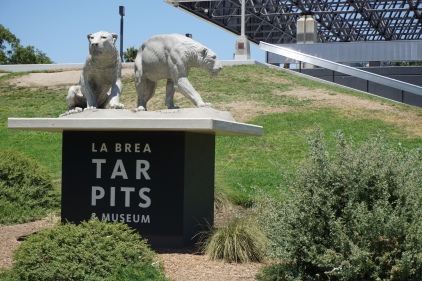 Because we are amusement park people, we went to Universal Studios. It is much smaller than Universal Orlando, but I enjoyed it more. The rides were great, but the best part was the studio tour, which is included with the admission to the park. It is a huge tour because its part of the amusement park, but it’s still worth doing. They film a lot of current TV shows there, such as The Good Place.

Have you been to Los Angeles? What was your favorite thing to do?